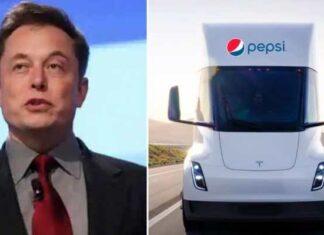 The Chief Executive Officer, Tesla Motors, Elon Musk, has announced that the company wil start production of electronic trucks and they would be ready for deliveries by 1st December

The world’s richest man said that Tesla’s first deliveries of the trucks would be to Pepsi on December 1, 2022.

Elon Musk disclosed this via his official twitter page on Thursday, sharing a photo of the truck, calling the trucks Tesla Semi Trucks.

He wrote: “Excited to announce start of production of Tesla Semi Truck with deliveries to @Pepsi on Dec 1st!. 500 mile range & super fun to drive.”

Wakadaily report in July that Musk intends to terminate the merger agreement deal for $44bn of buying Twitter, due to Twitter’s refusal to provide data and information he needs.

A letter sent by a lawyer on Musk’s behalf to Twitter’s chief legal officer. Says “While Section 6.4 of the Merger Agreement requires Twitter to provide Mr Musk and his advisors all data and information that Mr Musk requests “for any reasonable business purpose related to the consummation of the transaction,” Twitter has not complied with its contractual obligations. Adding that Twitter has failed or refused to provide this information. Sometimes Twitter has ignored Mr Musk’s requests, sometimes it has rejected them for reasons that appear to be unjustified, and sometimes it has claimed to comply while giving Mr Musk incomplete or unusable information,” part of the letter read.