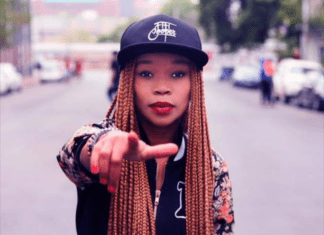 She came to the spotlight with her rap single “Chechella Morao” in 2010.

She was born to a family of three children, and she is the youngest among her siblings.

Fifi had her primary and secondary education in Mahikeng, while she studied Media at the Boston Media House. Fifi Cooper began her music career at the early age of 8 but she came out professionally in 2008 when she made a guest appearance on Mo’Molemi Motzamal: Rebel with a pause album.

She kicked off her career as an R&B singer before she came to the limelight in 2010 with her rap single “Chechella Morao”.

The creative hip-hop songstress signed a recording contract with Ambitiouz Entertainment in 2015, which saw her release a new single titled “Kisses” as produced by AB Crazy. Of Course, the song was accompanied by a music video directed by Dino Benedetti.

Fifi Cooper also released her debut album titled “20FIFI” which earned her so many nominations and won several awards including three categories at the 15th Metro FM Music Awards.

In 2017, she left Ambitiouz Entertainment along with A Reece and hip hop duo B3nchMarQ.

Fifi soon gained recognition for his musical versatility and was regarded by the media as “Motswako first lady”.