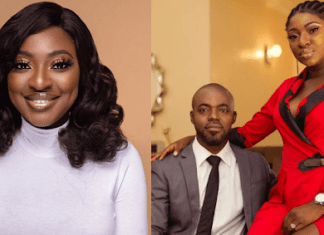 Yvonne disclosed this during an interview on Mercy’s Menu, hosted by her colleague, Mercy Johnson-Okojie, where she spoke about the crash of their marriage. She said what led to the break up of their marriage wasn’t really worth it.

Regarding his absence, Yvonne said that the only time he saw his child was after she had forewarned him that his name would be removed from the child’s birth certificate if he did not show up.

According to her, “We don’t talk. he doesn’t come around, he doesn’t call, he doesn’t do nothing. I don’t know what it is that could cause a friendship… because apart from the marriage, we had a good, very solid friendship.

“I think I still look at that friendship and believe this thing wey we dey experience now, we no suppose to, at least that friendship wey we get supposed to cover up for somethings,” she noted, switching to pidgin.

“Even the first time wey he come house, when he finally publicly accept say na him pikin I born, I give am ultimatum say if he no come, once my pikin reach five years, I go remove his surname comot for him name.

“Because I have to put Jegede-Fawole for there because I know as I take suffer go America go born the pikin.

“I suffer, I clear my account say this America, my pikin must get another passport. I say as long as na only me carry this problem emotionally, financially, otherwise, I’m going to put my name with his surname, so I put a compound name; Jegede-Fawole.

“Your gift is in my hands yet you don’t care. You see, one moment I dreaded the most is for my child to wake up one day and ask where is my father and it has started happening.”

Wakadaily learnt that Yvonne Jegede and Abounce got married in February 2017 and welcomed their first son in November of the same year, but the duo went their separate ways two years after.