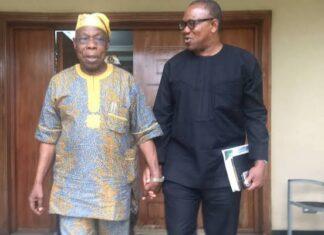 Obasanjo via his official Twitter page called on Nigerians to vote for the LP standard bearer in the February 25 presidential polls.

The former President in a letter titled: “My Appeal to all Nigerians, particularly Young Nigerians’, I am constrained to write this letter to all Nigerians especially young Nigerians, friends of Nigeria globally as well as our development partners because of the gravity, responsibility and implications of the collective decision Nigerians, both young and old, will be made within the next two months.

“The last seven and a half years have no doubt been eventful and stressful years for many Nigerians. We have moved from frying pan to fire and from the mountain top to the valley.

“Our leaders have done their best but their best had turned out to be not the best for Nigeria and Nigerians at home and abroad. For most Nigerians, it was hell on earth.

“Those of us who are alive should thank God for His mercies, brace ourselves for the remaining few months of this administration and pray and work very hard for an immediate better future – a future of liberation, restoration and great hope and expectation.

The ex- President added that, “None of the contestants is a saint but when one compares their character, antecedents, their understanding, knowledge, discipline, and vitality that they can bring to bear and the great efforts required to stay focused on the job, particularly looking at where the country is today and with the experience on the job that I personally had, Peter Obi as a mentee has an edge,” part of the letter read.

However, his endorsement attracted angry reactions from the All Progressives Congress, (APC) and  Peoples Democratic Party, (PDP) described his support for Obi as worthless.

Responding to Obasanjo’s message, the Director, Media and Publicity, APC Presidential Campaign Council, Bayo Onanuga, described the endorsement as worthless, adding that Obasanjo was a paperweight with no political goodwill.

Account to Onanuga, “We read with amusement the endorsement of Mr Peter Obi, the Labour Party Presidential Candidate by former President Olusegun Obasanjo in his New Year message on Sunday.

“Following calls by journalists from various media houses who asked for our reaction we decided to make this preliminary statement, though we didn’t consider the so-called endorsement to be of any value.

“We respect the democratic right of former President Obasanjo to support and endorse any candidate of his choice in any election.

“We make bold to say that our party and candidate, Asiwaju Bola Ahmed Tinubu will not lose sleep over Obasanjo’s move, as Obasanjo is notorious for always opposing progressive political forces, as he did against MKO Abiola in 1993.

“The endorsement is worthless because the former president does not possess any political goodwill or leverage anywhere in Nigeria to make anyone win a councillorship election, let alone a presidential election.  He is a political paperweight. He is also not a democrat anyone should be proud to be associated with.’’

Minister of State, Labour and Employment, Mr Festus Keyamo, SAN, described Obi’s endorsement as a bad commentary on the chances of the Presidential Candidate of the PDP, Alhaji Atiku Abubakar.

The Director, Public Affairs and Chief Spokesperson of the APC Presidential Campaign Council, PCC, however, said the former president was well within his rights to make his choices known.

Keyamo in a tweet, said: “Quite within Obasanjo’s right to endorse anyone, but bad for PDP in two ways: One, Atiku’s former boss does not think he deserves to be President this time around. Two, the little support Obasanjo gave PDP in 2019 and they failed, he has taken that away to LP. No effect at all on @officialABAT”.