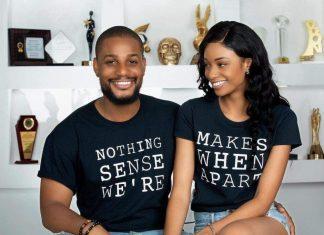 Wakadaily earlier reported that Fancy Acholonu, via her Instagram page, which has now been deleted tendered a public apology to Alex for cancelling their wedding which was scheduled to hold by November 2021.

However, Alex fans have not taken Fancy’s apology lightly as they believe there is no room for reconciliation after what they described as a “public humiliation” of their favourite.

According to reports, the actor had forced his ex-fiance to publicly apologise to him and to retract some of her statements. Insiders further revealed that the apology was just something Alex demanded just to repair his image which she dented through her statement about their break-up.

While responding in the comment section of her Instagram post, the model confirmed that she was forced to make the apology and she fell for it.

The fan wrote, “Did Alex convince u to make that apology post? I saw something on the blogs. If he did. Sis that is extremely manipulative you should run for your life. He only wanted to use you for revenge”.

In her response, Fancy wrote, “Yes he did. It’s true. I fell for it. My eyes are now fully open. I’m at peace & now have full understanding.”

Another follower wrote, “You’re beautiful  What really happened between you too? Maybe you will feel better if you open up. Don’t take all the blames alone!

Fancy Acholonu responded, ‘@(null) you are so right! I’ve literally said nothing about why I even ended it in the first place. People are attacking me not even knowing the pain I went through and he’s busy asking me to apologize publicly all the time just for his image. What about my image he’s now trying to damage? It’s beyond cruel. Im now longer scared or under his control.”

Things get messier as their private chats surface online

From the leaked chats, “it has been discovered that Fancy has been living a traumatic years with the actor as he was emotionally abusing her. The expose showed that the lovebirds never got intimate during their 5 years relationship as Alex Ekubo pretended to be celibate, while sleeping with other women. From the chat, their relationship has been a facade as Alex Ekubo was allegedly verbally, mentally and financially abusive.

“No I won’t. Alex has succeeded in trying to ruin me and my reputation just because I left him. Grace you sightly know me I’m calm quiet dance, play work, and mind my business. I endured everything a Nigerian women typically does from her man which is lies and all the cheating etc. But to make me apologize constantly publicly. It is WRONG! I never revealed why I left. I never bashed him. I only said sorry for making a statement. I am someone’s child, someone’s future wife. I need to speak up for myself. Don’t tell me to stop. Silence is why many people are depressed. Alex needs to stop is manipulation! His ego and wanting me to say sorry all the time is a problem NOT me! Everytime I’ve made its a statement is because of HIM! Don’t tell me to stop. Tell him.”