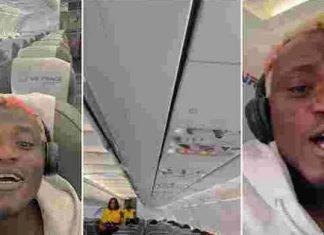 Popular street-pop artiste, Habeeb Okikiola, professionally known as Portable, has shared his experience while traveling from Lagos to Benin.

The ‘ZaZu’ crooner showed off the empty seats behind him, saying that people are too broke to get plane tickets.

Sharing a series of video, the Sango-based star artiste revealed that he had boarded a flight on popular airline, AirPeace, from Lagos to Benin, but to his surprise his crew members were the only ones on the flight as the plane was filled with empty seats.