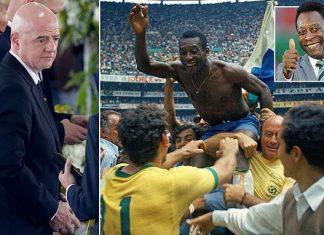 We’ll ask every country to name stadium after Pele – FIFA

Gianni Infantino, the FIFA President has said they will ask all countries to name a stadium after Brazilian football legendary, Edson Arantes do Nascimento, professionally known as Pele.

Gianni stated this on Monday at the late icon’s wake in in the city of Santos, Brazil, saying renaming a stadium after “the king of football” is a tribute to him.

Wakadaily reported that the Brazilian legend, died at the Albert Einstein Israelite Hospital in Sao Paulo, after a long battle with colon cancer at the age of 82.

Attending the 24-hour wake along with the heads of the South American and Brazilian football confederations, Infantino was among the first to pay homage before Pele’s open casket.

Speaking about honouring Pele, FIFA President said, “We’re going to ask every country in the world to name one of their football stadiums with the name of Pele.”