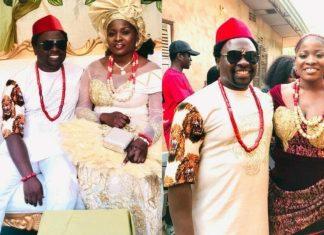 Eight years after the passing of his first wife, Popular Lagos-based comedian David Ogechukwu, well known by his stage name as Elder O, has found love again and wed his new partner.

Wakadaily learnt that the comedian married his first wife, Charity Odoemelam on February 1, 2014 and sadly he lost her during childbirth, just few months after their wedding.

Comedian Elder O however, promised to wait for five years before he remarries.

A close source said, “He stayed 8 years before remarrying because he wanted to properly take care of his son. It wasn’t easy, but he tried his best. His wedding has been fixed for January 3, 2023.”

It was that gathered, Elder O held his traditional marriage on Tuesday, January 3 with his beautiful damsel, Chiamaka Ukeje from Akpulu in Imo state.

Taking to his Instagram page on Wednesday to expressed his excitement, he wrote: “It ended in praise. Happy married life to us.”