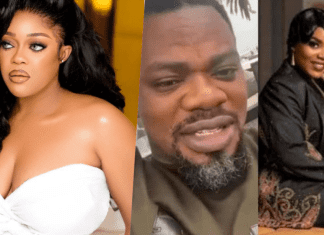 Nollywood actress, Eve Esin has demanded the arrest of George “Baby Brother” Wade, her colleague and Empress Njamah’s former fiance, who has been posting nude of her on a Whatsapp group he created.

It is no longer a secret that Empress Njamah is embroiled in a scandal with her ex-fiance, who is determined to damage her reputation.

Reacting to his threats, Eve took to her Instagram page, to call for the arrest of Empress Njamah’s fiance, for constantly releasing nude videos of her online.

Defending Empress, Eve questioned the rationality behind the nude video leaks, also asked if Empress was meant to be on a skirt, suit, iro and buba while in the relationship.

Eve Esin wrote, “We should look for this man and bring him out!!!
Like I don’t even get it. Been trying to understand all these! What’s with the videos? Wrong on all levels. Should people no longer have relationships? Was she meant to be on a skirt, suit or iro and buba in a relationship? How do you record private moments with a loved on? Yes, she assumed she was in a relationship and let her guards loose. How do you claim to date and love someone when your busy scheming? Mehnn!!! It’s a whole messed up situation. Let’s tag whoever we can please”.