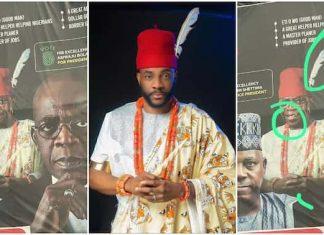 Nigerians react to a billboard photoshopped of the presidential aspirant of the All Progressive Congress (APC) Bola Ahmed Tinubu, on Ebuka Uchendu’s body.

His political team did a campaign billboard for him in Lagos, the editor, however failed to cropped out Ebuka’s wedding ring and cap, which made it easy for people to spot the photoshop.
This viral photo was shared by former Kogi State senator Dino Melaye, who dragging Tinubu as a liar and a deceitful person for stealing an image of Ebuka and using it as his.
Dino wrote, “See how Tinubu dem photoshop Ebuka’s picture. Plus feather and ring placed in same position. Oga ooo. There is nothing original about this Emilokan man. SDM”.
See some reactions below:
@Dejay tee wrote, “Can you imagine? Chai this man is definitely a criminal I swear… nothing is legit about this human… He’ll finish this country if una like make una still think 2023 elections is about tribal game. It’s about redemption and survival of this country and her people. Please vote PO.
Another @Omega dreams wrote, “Omo the red flags. Are very visible!!! Dear Nigerians, save your country!!! Go & collect your PVC!!
@Mezie official wrote, “I seriously don’t know what sign again we want. The gods are constantly dropping and showing us. Thick red flags but we just dey play. If una like no vote wisely na all of una go pay the price. Good or bad governance no dey target any particular person. E go touch all of una.
Another @Bad gal kushi wrote, “This is not even funny. It’s very disturbing.”
ADVERTISEMENT