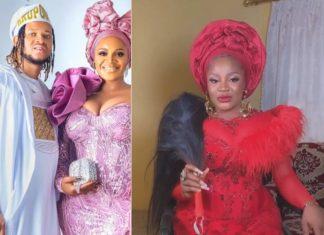 Uche Ogbodo and Bobby Maris tied the knot traditionally on January 5, at her hometown in Imo State.

According to reports, Uche doesn’t want the public to know about the occasion as she had earlier lied that she was officially married to the father of her second daughter.

This comes eight years after the actress’ failed marriage to footballer Apo Arthur, which produced a child.

The social media influencer had found love again in the hand of fastest-rising singer, Bobby Marris.

From the video circulating on social media, Uche and the father of her second daughter were dressed appropriately in traditional attire.

Taking to her Instagram page on Thursday night, Uche wrote, “Already Mrs Bobby Florentus Ugwoegbu but had to be Double sure. Congratulations are in order. Video and pictures coming soon”.