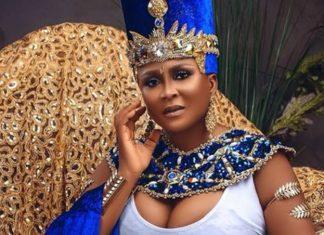 Nollywood actress, Ruth Eze has said she would prefer to be a lesbian than go through all these domestic violence with a man.

The actress stated this during an interview, speaking on her relationship struggles, and why she plans to have kids for a rich man without any marriage commitment.

There have been reports of domestic violence and deaths in marriages, have you been a victim of assault?

The Asaba, Delta State-based said, “This question reminds me of my late elder sister. She had experienced violence in her marriage and that’s what killed her. Even the Bimbo IVD’s story reminds me of her. It’s crazy how people take this marriage stuff, how people go through some deep crazy stuff with a man. It is better to be a lesbian than go through all these domestic violence with a man. You’d give a man your whole life? No, I can’t do that. Never! I’ve never gone through domestic violence and no man can make me go through that. If I’m dating you and I notice one toxic attitude, I’m out of the relationship. And I’ll start dating someone else in the next few weeks. That’s one thing I love Tiannah Empire for. She keeps changing men as long as it makes her happy, and that’s the kind of life I’m living.

What’s your advice to women who find themselves with men of such character?

“My advice to anyone going through domestic violence is to dump that marriage and run! The truth is that if you don’t run, you are going to die in that marriage. Look at all the stories you’ve heard about domestic violence, what does it lead to? The painful part of it is that the women are the ones that will die because we are fragile. If you are going through domestic violence, run! Leave that marriage or relationship. That person is not the only person in the world. I think one problem most women face, including my late elder sister is, ‘how am I going to start all over again? I’ve given this person my life.’ What will people say?’ These are some of the problems women face.

Is domestic violence part of the reasons you’re single?

Domestic violence is not part of the reasons I’m scared of marriage, but no man can be violent with me. You can’t! I will not allow you. I am educated, smart, brilliant, beautiful and talented; I will not allow you. I am not one of those women that will allow one man to be violent with them. But with these crazy stories flying everywhere, I’m just scared (of marriage). What I want now is to have a very rich man, have babies for him and just live my life. But if by the grace of God I get married, he can’t be violent with me. I’m going to lock him up. I’m going to deal with him afterwards. While we are dating, I will push you to see the level of your anger. If I find out that you are temperamental, just by finding out alone, I’m out. You won’t see me again. I’ll leave that city, change my number; I know how to do those things.”