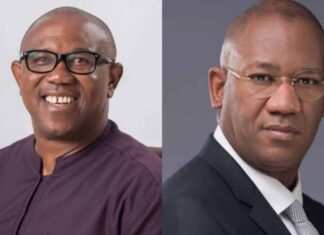 Voting for Peter Obi is a vote for Nigeria’s Unit, according to Dr Yusuf Datti Baba-Ahmed, the Vice Presidential Candidate of the Labour Party.

The former Kaduna lawmaker said this in his opening remarks at the Peoples Town Hall meeting organized by Channels Television, on Sunday.

Expressing the readiness for his principal, Peter Obi to tackle critical areas that would unlock Nigeria’s potential.

He said, “We will address unprecedented, aggravated corruption. We deserve the votes of Nigerians because this is turning out to be an election based on character backed by records, competence, and capacity. Northern Nigeria is paying a massive price today because they have been voting based on ethnic and religious lines for a long time We are going to stop the killings and start the healing; stop the stealing and start the keeping; stop the slide of our currency and start the climb of our society,” he said.

Datti-Baba Ahmed added that, “The  day you hear President Peter Obi, Nigeria will be United.”

The Pro-chancellor of Baze University who was emotional during the Town Hall meeting while  speaking about insults directed at his family by political opponents.

Datti said: “When I joined the ticket, I impeached certain lies against him (Peter Obi) and particularly my good friend on the APC side on the same level. You know when people think they have money, they have power, and the sitting authority is theirs.

“When people think they have money, they have power, and the sitting authority is theirs, there’s no limit. Someone has to tap them on the shoulder. I did it and I pointed a finger. You do it again – do one, I’ll do three. You know I’m capable of doing it.

“They’ve stopped. However, me and my family have been paying a huge price for my attempts to rescue Nigeria. They sent all sorts of people after me. I would have been much happier if only they stopped at me as an individual.”