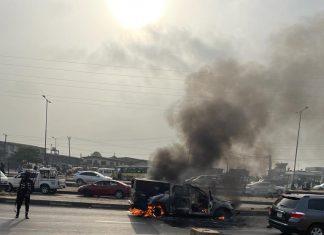 One killed as Yoruba nation agitators clash with police in Ojota

A yet-to-be-identified young man has been killed in a clash between Yoruba Nation agitators and the police in the Ojota area of Lagos State on Monday morning.

According to reports, the Yoruba Nation group had planned to hold a mega rally at Ojota to press for self-determination.

A source said, several protesters showed up to call for the Yoruba Nation among other things, and when the police showed out to restrain them, a fight broke out. Shortly after they began to move through the streets, the men of the Lagos State Police Command, along with a detachment of members of the Rapid Response Squad, State Taskforce, and regular divisional officers, came out in procession.

Police arrived the scene and shot teargas to disperse the crowd.

“Ojota is up in smoke, police are shooting teargas, and one person is dead. There was a clash between the OPC and Yoruba Nation,” and eyewitness said.