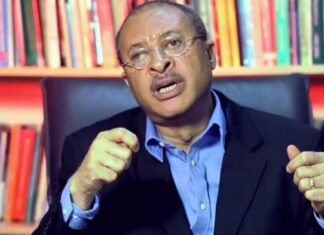 Obi-Datti Movement is beyond Obi, it’s about Nigeria – Utomi

A Nigerian political economist and chieftain of the Labour Party, Professor Pat Utomi, has stated that the Obi-Datti Movement is beyond Peter Obi, because it is a movement about taking back Nigeria.

Utomi spoke while addressing journalists at the sidelines of a campaign event organized for Labour Party candidates for the forth coming general elections, held at Merit House, in Abuja, on Thursday.

Utomi, who is the Convener of The BIG-TENT Coalition of Political Parties said, “What we are doing in this campaign is multitasking. Even our chairman just came in yesterday and all of us here we came because something really matters and what matters is the heart and soul of this country.

“We must come together to see that at least we save our nation. The Obi-Datti movement is not about anybody but Nigeria. We want to be citizens, we want to be proud of this country everybody know what happened just yesterday.

“Our passports have been downgraded more while some other countries we have seen their passport moving up.

The Profession of Political Economy, “We will not be second citizen in our country just because of small group of people calling themselves elites taking 450,000 barrels of crude oil and also taking subsidies and enjoying everything while all of us living in object poverty.“