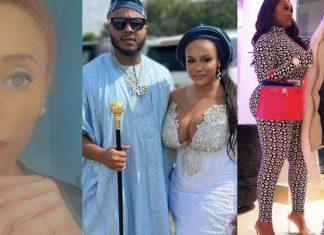 Queen Ojanga, the mother-in-law of Sina Rambo Adeleke, says Davido should be held responsible if any harm comes on her daughter.

Wakadaily report on December 12, 2022 that the marriage between Davido’s cousin, Sina Rambo, and his wife Korth Adeleke, has crashed.

The ex-wife Korth Adeleke, revealed that their one year marriage is over, she also accused Sina and his sister of violence, with a videos, chats, and pictures to prove her claims.”

However, Korth got engaged in a social media row with a fan who accused her of being jealous of Davido’s wife Chioma.

In reaction, Sina Rambo’s estranged wife said, “Abeg did you get lost in my comment section? Carry your endurance group elsewhere.”

Meanwhile, in a post on Friday, Korth’s mother alleged Davido threatened her daughter for taking a swipe at his wife, Chioma.

she said, “I want the whole world to know that if anything happens to my daughter, Davido Adeleke should be held responsible as he has threatened to deal with her.

“My daughter is a German citizen by birth and nationality. I am tagging everybody including the bloggers to come out and present proof that my daughter Heidi insulted or called Chioma out directly.

She continued, “I have so many threatening messages to my daughter which we have ignored over a couple of days but this time we are not ignoring this.

“As a mother this time, I am not ignoring any threat to my daughter. I want the whole world to see this. We have had enough and nobody will take my silence for granted.”