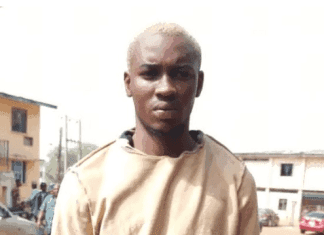 How 23yr-old ‘yahoo boy’ tricked me into Nigeria – US victim

Vonapolouis Moss, a United States citizen has explained to the police Command in Kwara how a 23-year-old internet fraudster widely known as ‘Yahoo boy’, Awoleye Joseph, tricked her into travelling to Nigeria.

Moss said she was lured into the country on January 9, 2023, by the suspect.

The state Commissioner of Police, CP. Paul Odama, disclosed this while parading the suspect before reporters at the police headquarters, Ilorin, on Friday.

He said the suspect presented himself to the victim as an American on TikTok, a social media platform with the name, Howard Adams, and defrauded her of US$ 1,000.

Joshua Awoleye, a Higher National Diploma student of the Kwara State Polytechnic, lodged Moss in a hotel and defrauded her.

“The suspect later took a step further by luring the victim to fly into Nigeria on January 9, 2023, through the Murtala Mohammed International Airport in Lagos, after which she flew into Ilorin the next day and was received by the suspect.

“The suspect also deceitfully took an unspecified amount of USD from the victim before she was rescued by police operatives. The necessary authorities have been contacted for appropriate action,” he said.

Speaking in an interview with newsmen, Vonapoloius said that she arrived in the country on Monday night and moved from Lagos to Ilorin on Tuesday morning.

“We met on social media and he invited me to visit Nigeria but when I came, he took me to the Bureau de Change to change my money to Nigerian currency and he also took me to Shoprite. When the money on me finished, he told me to tell my people to send more.

Speaking further she said, “I like Nigeria and I would like to come back but what I want now is to go back to America.”