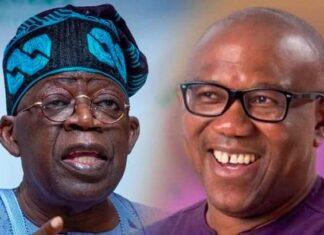 The Labour Party presidential candidate, Peter Obi has replied the All Progressives Congress flagbearer, Bola Tinubu, saying that the country would be safer in the hands of a stingy man.

Wakadaily gathered that Tinubu during his campaign speech on Saturday, January 7, 2023, in Ondo State said the former governor of Anambra State saved money instead of saving people.

Tinubu described Peter Obi as parents who would be stingy about spending their resources and allow their children to suffer.

Reacting to the comment, Obi during a rally in Akure said, “Yes they said l am stingy, but we are not out to steal the nation’s wealth but all we want to do is to use the nation’s money for our people and development of this country

Obi’s words, “They said that I’m stingy, we want stingy people now, so that we can keep the money. We want to make sure we use your money to transform the country.

This election that is coming now, don’t vote for anybody because of tribe but vote for someone that will move the country forward.

“This election is about character and people we can trust. Everybody knows the schools my running mate and I attended. You all know our age, our schools and everything about us. Our background are known.

“When I was the governor in Anambra, everybody knows what I did, all the works I did. When I left government, I left $150m, everybody knows this, they know where I live, you can go and verify. The entire Nigeria is insecured , people are living in suffering and hunger. We want to secure and unite Nigeria. We want to move Nigeria from consumption to production.

“No more schools strikes. We will support small businesses. No Nigerians will leave his or her community because of insecurity. We guarantee you that insecurity will stop. We want to fight corruption. We will make sure that we have electricity.

“The presidency is not a birthright of any of the ethnic groups in the country but said a credible, prudent and responsible leaders should be voted to power in 2023

Obi continued: “So go and pick your PVCs and vote for Labour Party and make sure that they count the vote. I’m the only Governor that left good money in office as far as the history of Anambra State is concerned.

“We will make sure that our security men work in a conducive environment and their families will be okay so that they can protect the citizens very well. We’ll instal structures that will work in Nigerian.”