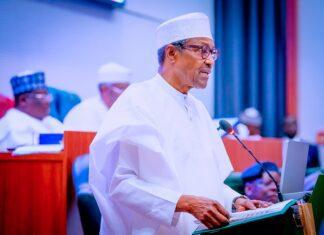 Some Nigerians use religion for political agenda, says Buhari

On Tuesday, the president, Major General Muhammadu Buhari (ret.), said that certain Nigerians were advancing their political and economic agendas via the use of religion.

The President stated this at Nouakchott, Mauritania, while meeting with Rashad Hussain, United States Ambassador-at-Large for International Religious Freedom.

In a statement signed late Tuesday by the Senior Special Assistant to the President on Media and Publicity, Femi Adesina, titled ‘The place of education in addressing religious intolerance, by President Buhari.’

“It’s a problem Nigeria has been struggling with for a long time, and it is completely unnecessary. Some people use religion as sentiment, but with adequate education, people are seeing through it now,” Buhari said.

The President recounted a private meeting at the White House with former US President Donald Trump, where Trump asked him: “Why are you killing Christians in Nigeria?” Buhari explained to him that the issue in the country was not religious, but rather criminal, and a usage of religion by some elements to further their economic, and sometimes, political interests.

According to him, “The majority of the people just want to practice their religion without problem, but some people cash in on religious misunderstanding for their own ends. When people are educated, they are able to discern when others want to use religion for certain ends. They do it mostly for material reasons.

“Also, when some people are incompetent, they bring in all sorts of excuses, including religion,” he added.