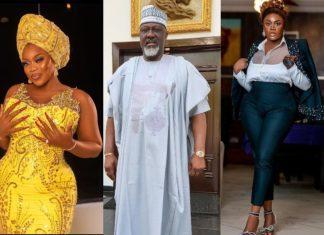 GistLover captioned the post: “I like fine fine pictures Sha. HARD WORK UNDER DINO NO BE SMALL WORK OO I DEY COME”.

Some social media users speculated that the blogger was referring to Nedu’s interview, but the gist blog refused to reveal any information about the photos.

The spokesman of the PDP Presidential Campaign Council, “I will sue you this time. Will locate you. I don’t know any of these ladies. Agent of APC. You will not get away with your lies and unfounded story this time. You just dialed the wrong number. Apologize within 24hours or face consequences”.

Meanwhile, the two influencers has debunked the rumours making rounds, according to them, they never met Dino personally before.

However, GistLover went the extra mile to prove they are having an affair with the Senator, by sharing a video of Ashmusy with Dino having fun, on his Instagram page.

Ashmusy could be heard in the video saying “Dino baby” while hugging him.