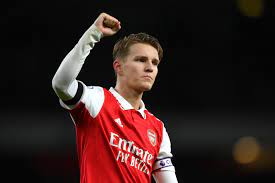 Martin Odegard (born December 17, 1998) is a Norwegian professional footballer who plays as an attacking Midfielder for the English club Arsenal and the national team of Norway.

His style of play has been compared to the Midfielder Mesut Ozil, for his creativity and incisive movement of the ball.

He was raised in a Christian family by his parents, Hans Erik Odegaard, and Lene Cecille Odegaard.

He had his first years in the local sports club Drammen Stron, which his father, Hans Erik Odegaard, co-founded, and also became the coach of his son’s team. Martin Odegaard began his football career at the youth level with Stromsgodset.

He signed for Real Madrid in 2015 before joining Heerenveen, Vitesse, and Real Sociedad on successive loans between 2017 and 2019. He also won Copa del Rey with Real Sociedad in 2019.
He joined the English club Arsenal on a loan deal on January 27, 2021. He made his debut in a 0-0 home draw against Manchester United where he came in as a substitute for Emile Smith Rowe.

He made his league start for Arsenal on February 14, in a 4-2 home win over Leeds United. He scored his first goal for Arsenal in a 3-1 win against Olympiacos in the first leg of the Europa League round of 16.

Arsenal later signed Odegaard on a permanent deal from Real Madrid on August 20, 2021. He signed a four-year deal for a transfer fee of €35 million. He was announced as the club’s captain in 2022.

Odegard represented Norway at the Under-16, under-17, and under-21 levels before being called up to the senior team on August 19, 2014.

He made his debut in a goalless draw against the United Arab Emirates and became the youngest player to play for Norway at the senior level, at 15 years and 253 days. He was named the captain of the team by manager Stale Solbakken, in March 2021.