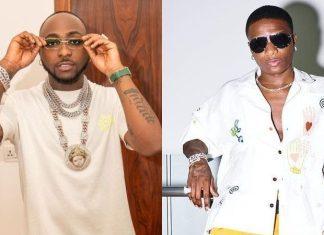 The ‘Joro’ Crooner who is set to release an E.P, revealed this via his Instagram story that after his MLLE tour, Davido and him are going on tour.

Wizkid wrote, “After my MLLE tour!! Davido and I going on tour!! Save your coins!! No one hear pim!!”.

See some reactions below:

@Doctorpenking wrote, “Wizkid is going on a tour with Davido. Wizkid and Davido are very cool yet some people have cursed each other’s parents and blocked each other because of Wizkid/Davido banter. Wake up and receive sense.
@DanielRegha wrote, “Wizkid going on tour with Davido makes absolutely n¤ sense; He’s been snubb!ng Davido for years & d¤esn’t address Wizkid FC when they tr¤ll, but all of a sudden he plans a joint tour now that his starpower is dropp!ng? Why not with Burna? Davido sh¤uldn’t accept this. No offense.

Another @Pooja wrote, “Wizkid & Davido on stage & they suddenly paused & brought out Burna Boy out.Officially, this will be the end of anything celebrity stanship.

@Babanle wrote, “Make Davido just come online now and tweet “ No be me and you oooo’ make everywhere scatter.

@Lerry wrote, “The biggest surprise Wizkid and Davido can bring out on their joint tour is Olamide. Because those are the 3 legends that held the industry down in the 10s era.

Another wrote, “Best gift of the year two great African artist going on tour together, that’s a blast.”