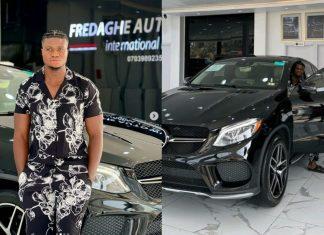 The Instagram comedian, who quit lecturing for comedy, is known for his dramatic yet iconic female character displays leaving fans laughing hysterically.

Zicsaloma shared photos of his luxurious car via his official Instagram page and captioned it; “My New Baby.”

The comedian had earlier recalled how he came into comedy by chance.

Aloma said, “It just started. It was not something I ever planned. It just started. There was a day my mum brought her old clothings, all those her church caps, I just decided to wear one of the caps, and I just flipped the wrapper over, then I now did a talking video, talking like a church woman, and when I posted one day on my Facebook page, people started laughing and sharing; and I was asking myself, ‘Is this thing really funny?’ They were like do more, do more, do more, and that was how skits started. And this was in 2017.

“I was a professional singer before people now knew me as a comedian. If you followed my journey, you would know I have been in some music reality shows like Idol, The Voice. I was doing relatively well. Like they say, some things would just come and take over, and I started doing comedy, and people were really accepting the comedy part of me, and that was how it blew up.”