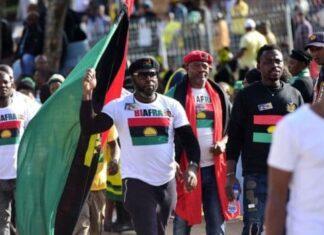 The Indigenous People of Biafra (IPOB) has unanimously suspends Kingsley Kanu, younger brother of its leaders Nnamdi Kanu, for breaking code of conduct of the pro-separatist group.

This was contained in a statement by the National Coordinator of IPoB, Germany branch, Mr. Collins Chinedu, entitled, “Suspension of IPoB membership of Mr. Kingsley Kanu, aka Kanunta” made available on Monday by IPoB’s Media and Publicity Secretary, Emma Powerful.

The statement read partly: “Mr. Kingsley Kanu has been in the constant habit of flagrantly flouting every IPOB code of conduct, thereby seeing himself as above the laws and often throwing every decorum to the winds.

“Secondly, he has been reporting fellow very hard working IPoB members to the German Criminal Police contrary to the IPoB’s Code of Conduct and violation of his oath to IPoB.

Issuing orders to his superior officers in the hierarchy of IPOB without the approval of the IPOB Leadership.

“Imposing and parading an expelled IPOB member, Mr. Ogbonna Abraham as the new National Coordinator in Germany with the sole intent to cause division within the existing structure in Germany.

“Ordering his purported national coordinator in German to create another principle servants forum through which IPOB members are being lobbied to join his illegal group and to attend series of his illegally organised online.

“The IPOB in Germany is a registered non profit making organisation under German laws
“Mr Kingsley Kanu must, therefore, be reminded that further violations of the code of conduct will have serious legal consequences.

“In view of the above stated infractions and anti-IPOB activities carried out by Mr. Kingsley Kanu, the lPOB leadership in Germany hereby, unanimously suspends him indefinitely from the family of IPOB in Germany led by Mazi Nnamdi Kanu with effect from today, the 21st of January 2023,” he added.