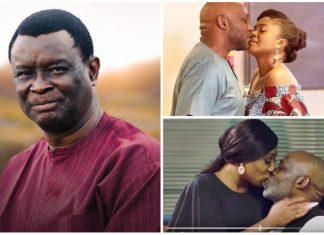 Evangelist Mike Bamiloye, the founder of Mount Zion Ministries, has given a caution to Nigerian actors and directors who take pleasure in kissing and romancing the opposite sex while on movie sets.

This is coming after the released of ‘Shanty Town‘ movie a 6-episode Nigerian series on Netflix.

“You have acted in many Movies in Nigeria and all your achievement in life has been that
You have Kissed several ladies and romanced many girls on film set,
The roles you love to play in movies are Roles where Men have to kiss you and where you have to play love roles.
My Dear Movie Actor!
Honorable Nollywoodian!
How many Ladies have you kissed on movie sets?

“Dear Screen Goddess of the Nollywood Empire,
How many Actors have done love scenes with you in Movies?
Different Mouths have Kissed your mouth in the name of being Professional!
You have been Directed by Lustful Directors to romance Ladies on Film set before More than twenty people who are behind the Camera.
It is like playing love with a woman in the market place!
And your Moral Defenses are breaking down daily before your very eyes!
You can no longer control your lust!

“Eh! You! Mr. Man,
You are a married Man, and you are kissing many ladies and your wife and children Are watching you in Movies in their homes and you think things will be alright with your wife?
And you think your Children will be OK in their mind?

“They see their Mother,
Having having hot Romance with other men in Movies they watch,
And they watch the reactions of their father
And you think they will be Alright in their Heart and Mind?
You want to be Professional!
You want to win Awards!
You want to be Nominated for OSCAR! Abi?
So you have to subject yourself to many disgusting actions on Movie set!
You have to allow many other men to climb on you before cameras because your want to be a Screen Goddess!
And you husband and children are also watching many of these Movies
AND YOU THINK THINGS WILL BE ALRIGHT FOR YOUR HUSBAND AND CHILDREN?

How can your Wife be Alright at home while she watch her husband passionately kissing another lady in a Movie!
What will become of your Children later as they have seen their father kissing and romancing other women in movies.
YOU THINK YOUR WIFE UNDERSTANDS?
YOU THINK YOUR CHILDREN KNOW YOUR PROFESSION?
You think console yourself that they know you are Acting as you fondle other ladies Breasts in broad daylight before the whole world! How will your marriage endure?

“How will your Children have the right frame of mind?
How will your Wife still fully trust you in her heart?
How will your husband also not be thinking of trying what you are doing on film set.
How will homes not be breaking?

“Our Children can no longer sit comfortably to watch Nigerian movies!
They will see skimpy dresses.
They will see nudity!
They will see open Romance and graphic love-making.
Parents are confused!
Which movies Will our Children watch now?
Nigeria movies are full of ladies who don’t want to wear clothes again!
And men whose heads are going crazy and their body is full of tattoos!
IN WHICH WAY HAVE YOU HELPED THE MORAL STANDARD OF THE SOCIETY NOW?

“Many Actors have KISSED and ROMANCED Cemetery Ghosts who are masquerading as Movie Actresses!
Lustful and Sexual spirits have possessed some men right on the Movie Sets and they can never have a settled home again!
Unless the Lord intervenes!

Many Marines Spirits have played Love Scenes with many Men and sealed their fate for life!
Many men have donated their destinies on the altar of wicked marine spirits operating as actresses on Movie Sets.

Evangelist Mike Bamiloye added that, “YOUR MOVIES HAVE CORRUPTED OUR SOCIETY!
Your Half Nude actress have polluted the heart of our young children!
Your scantily dressed Actress have manipulated the mindsets of our youths!
Male Actors with Madmen hairstyles and body full of Tattoos have changed the focus of our young ones!
THE MOVIE ACTRESSES OF OUR INDUSTRY ARE REMOVING THEIR DRESSES SMALL SMALL AS THEY ARE BEGINNING TO ENTER THE MARKET PLACE!
May God rescue us from this Powerful Tool of Manipulation,” Mike Bamiloye said.